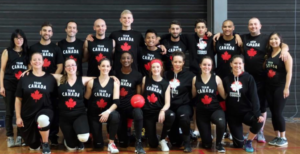 Perv of the week – Dodgeball Canada

As well as boozing we also consider ourselves aficionados of good looking, successful people and will be honouring them weekly. Like a fine red wine, we’re all for celebrating richness and a good body.

Warning there might be repeats, because some people will never not be sexy…

Perv of the Week – Dodgeball Canada

This week we honour the Canadian National Dodgeball Teams, both mens AND women’s (we’re equal opportunity perverts…) who dominated the land down under  during this years World Dodgeball Federation championships. The men’s team fought off a Malaysian comeback in the final match of the tournament using a mix of skill and utter attractiveness, to walk away with the gold medal and the hearts of hundreds of girls lamenting the fact that most of them are taken. The women fought ferociously in their finals, eventually falling to Malaysian and claiming silver, but showing they’re all sexy beasts to feared, improving vastly on their 2014 and 2015 finishes and showing they belong with the best.

We can’t single out just ONE lady or just A guy, when they entire team made us crawl out of bed at 6am on Saturday to watch the finals