In Honour of this weekend’s Grey Cup, we thought we’d give the CFL a little loving too
Heres how we rank the QB’s of the North based solely on looks. Which ones fail to go the extra 10 yards and which ones we wouldn’t mind widening the field for.

Now, we have loads of experience trolling the internet for pictures of men. And we also pride ourselves in being able to find the sexy in everyone (Thanks for the help Tequila!) but this is actually the best picture we could find of Matt Nichols. At least he looks like the kind of guy who’d always offer to help you move Now hear us out here. For every picture like the one to the left, there’s another 5 like this one. and this one Are you willing to take that risk?

“oh! Which one is your boyfriend?!” Does anyone remember the critically acclaimed, but under appreciated Clone High? At least we know what the cartoon Abe Lincoln is doing now after the show was cancelled. 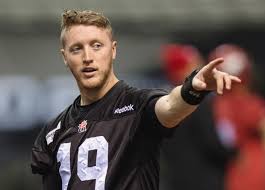 Though fairly good looking, He loses points simply because is name is Bo which we could never yell either in passion or an argument

We’ll take any excuse to move to the west coast, but Jonathan Jennings would make it even better. He loses a few points for having a very well trimmed beard but messy hair, which is confusing. Why not coif both?

WE’LL DO THIS POST IN ALL CAPS TO HONOUR THE GREYCUP BOUND REDBLACKS. SMILIN HANK JUST KEEPS GETTING BETTER, BOTH AS A QB AND IN HIS LOOKS. Young, Good looking and the only Canadian starting QB in the CFL? We’re getting all rouge-y in the cheeks (get it? CFL Joke)

The main reason we’ll be tuning into the Grey Cup this weekend. And literally the only thing we care about in Edmonton, or “Calgary Jr.”

Perv of the Week – Henry Burris

Perv of the Week – Marquette King

You may have missed

Is This About Epstein Again: The Scotch Sporting 2020 Prognostication Episode